We have gone through the remodeling process for a kitchen.  Let’s take a journey from beginning to end for this bathroom renovation.  As a professional interior designer in Bergen County, NJ, I often am called upon to help when a client has an emergency situation.

In this case, the tub faucet in the master bathroom began to leak hot water down the side of the tub.  It was constant and no amount of twisting or turning the handles turned it off.  The tub was inserted into a tile platform constructed with the original home in the late 1980’s.  It was surrounded by mirrors on the walls and ceiling which also had a skylight.  The clients didn’t even use the tub but they could not ignore the situation.  The continuous stream of water made a noise that made sleeping difficult.

The first thought was to replace the faucet parts that were leaking. However, with research, it was discovered there were no parts. Replacement was not an option either since that style was no longer available.

Several years earlier, the master shower had been renovated but the rest of the space was left as it was. Now, we decided to update the tub side of the bathroom to a fresh, new look.  The old bathroom had a bidet that no one used so we decided that it should go.  Now we had the space to make this a super oasis for relaxation and well being.

Here are some “before” pictures! 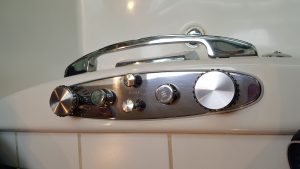 this is the culprit–the leaky faucet 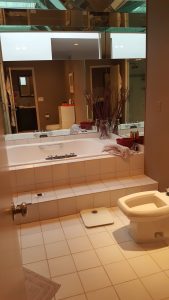 the old tile platform with tub inlay, mirrors all around and bidet 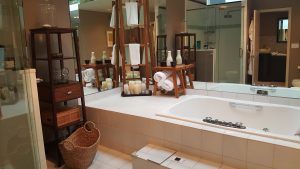 the step that everyone banged their toes on!

Keep following this blog to see what happened to this bathroom…and see the “after ” images!

Get in Touch Today!